The Chairman of Peoples Democratic Party Governors Forum and governor of Akwa Ibom State, Godswill Akpabio today said he doubts the number of alleged students said to have been abducted by Boko Haram at Government Girls Secondary School,Chibok in Borno State. Governor Akpabio expressed this doubt this morning while speaking on Channels Television breakfast programme Sunrise Daily monitored by CKN 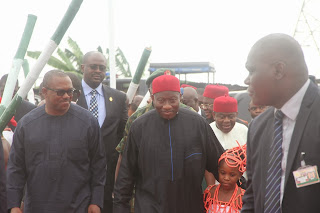 . According to the Governor,the various conflicting reports and certain fundamental indexes supports his claim. The governor, who said the issue is very sensitive, said he would not want to dwell so much on it so as not to arouse public condemnation. But he went on to ask certain pertinent questions. Some of these were how come the Principal and matrons of the school were not around when the incident happened. Why is it that none of the female teachers were also abducted? At one point did a female school have such number of male students sitting for the same examination? He went on to ask, how it was possible to ferry over 230 students in two buses according to the eye witnesses. Lastly, he also questioned the integrity of the leader of Boko haram who spoke on video tapes about the kidnap for according to him, the man was incoherent and looked like someone speaking under the influence of alcohol. He called for prayers for the rescue of the girls while rhetorically saying that he is ready to “buy” the girls since Boko Haram has threatened to sell them off in order to reunite them with their families.