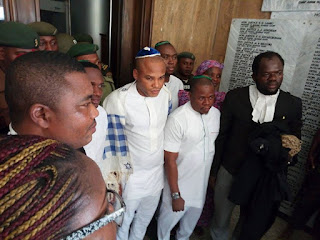 The IPOB in a press release signed by the Deputy leader of the group, Mazi Uche Mefor gave Uwazuruike four days to apologise to its leader, Mazi Nnamdi Kanu over a statement saying that Kanu and his members were fraudulent.

The release partly stated that, “I am giving Raphael Uwazuruike four days to provide evidence that Nnamdi Kanu and IPOB under the leadership of Nnamdi Kanu are fraudsters.

“We in IPOB at this moment demand that Uwazuruike must provide evidence to prove that Nnamdi and IPOB members under his leadership are fraudsters. Uwuzuruike’s evidence must be proven beyond every reasonable doubt. The evidence must not be anecdotal or mere conjecture, but verifiable and provable acts of fraud carried out by either Mazi Nnamdi Kanu or members of IPOB.

“The Indigenous People of Biafra (IPOB) is a mass movement of freedom fighters with a singular objective which is the restoration of the nation of Biafra. Biafra, as viewed through the prism of IPOB consists of all the states in the present Southeast and Sout-South geopolitical zone of Nigeria except Edo state,” he said.

The group berated Uwazuruike, saying that if he had remained faithful, honest and sincere to the ideals of freedom fighting there would not have been any need for the emergence of IPOB or any other organization fighting to restore Biafra.

It also promised to release damaging information on Uwazuruike if on the expiration of the period given to him, he failed to make available all evidence of fraud against Nnamdi Kanu and IPOB.

“If you fail to do so, we will release information about you laden with facts and figures. All you have struggled to hide from public knowledge will be laid bare. At the end of this exercise, MASSOB members themselves will lynch you.

“We are not against any person wishing to remain relevant from peddling market place gossip against our leader but in true IPOB form, we expect concrete evidence to accompany your flimsy accusations because we shall come after you with avalanche of proof that will make you wish you never associated your dubious self with the word, Biafra,” the release said.

Uwazuruike had reacted to claims by IPOB that he was one of those ready to testify in mask against Kanu, saying that such was untrue, and that Kanu and his IPOB were fraudulent people who are ripping their members off.
ENDS.

War of Words in Nanka, Over Coronation of New Igwe, as Opposition Rejects Monarch