Facebook Twitter LinkedIn Tumblr Pinterest Reddit VKontakte Odnoklassniki Pocket
Less than 48 hours after taking over officially as the Anambra State police commissioner, Mr Sam Okaula has registered a feat, by rounding up 20 suspected cultists, whom he said were members of Black Axe Confraternity.
Okaula said the cultists were mostly students of Federal Polytechnic, Oko and some unemployed youths and were arrested while trying to initiate some new members into the group at Ochuche, Umudu village in Ogbaru local government area of the state.
Also, one Mr Uche Ugwu, aged 35 was arrested with a Beretta pistol while trying to rob a man of a large sum of money along the Enugu-Onitsha expressway, the commissioner added.
Okaula said this feat was register in just 24hours of his assuming office as the commissioner of police in the state, and that these should be a warning to criminal elements in the state that the time for their operations was up.
“As some of you already know, I took over from my predecessor yesterday(Monday), and almost immediately after that ceremony, we got information of some cultists who were about to initiate new members into their group and we swiftly moved in and rounded them up.
“I met a safe state, courtesy of my predecessor and most especially the governor, Chief Willie Obiano who have been working hard to ensure security in the state. I am calling on the people of the state to join hands with me, so that we can sustain that security and move the state to another level.
“The people of the state should know that they now have a new Sheriff in town, and the new Sheriff does not tolerate crime. All criminal elements should turn a new leaf now or leave the state, else they will meet their waterloo.” Okaula said.
He also enjoined the people of the state to feel free to approach his office with useful information on anything that is likely to cause a breech if peace, and he would be ready to work on it.
The police chief stated that he is going to initiate a new strategy in fighting crime in the state, but will prefer not to disclose it, but let the people of the state feel it.

Items recovered from the suspects included; pistols, live cartridges, concoctions for initiation, gongs, drums and other musical instruments meant to be used for the initiation. 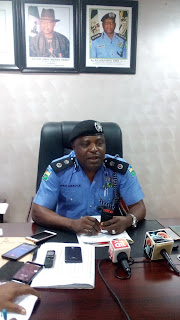 WHAT NNAMDI KANU'S WIFE SAID ABOUT HER HUSBAND